Serving the Community since 1961

Cape Cod Community College was established in 1961, the second institution to open as part of what is now a 15 community college system in Massachusetts that resulted from the persistent efforts of Senator Edward Carleton Stone.

Cape Cod Community College opened under the leadership of its first president, Irving Bartlett, in the building that is now the Barnstable Town Hall. One hundred sixty-six students from thirty-three communities enrolled in the College's first class. There were five full-time faculty and six part-time instructors to greet them. These students were offered five terminal programs, as well as the transfer program. 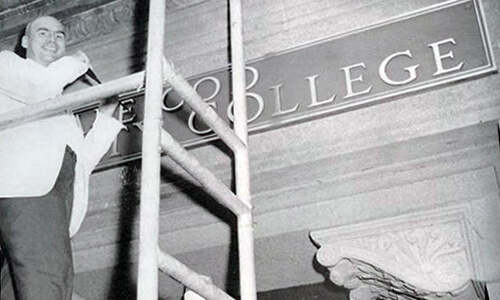 For the first two years, courses were offered in the evening in cooperation with the Massachusetts Division of University Extension. In 1963, Cape Cod Community College's first evening program found one hundred and thirty students enrolled in ten different degree-credit courses. In the spring of 1963, the first summer session had enrolled one hundred and forty-five students from fifty colleges and universities taking degree-credit courses.

Outgrowing its first home, in 1970 Cape Cod Community College moved to its current location on 116 acres in West Barnstable, making it the first community college in the state to build a new campus. Under the direction of its second president, E. Carleton Nickerson, the College moved into five of the eight buildings designated in the master plan for the new campus.

In 2006, the College opened its doors to the new Lyndon P. Lorusso Applied Technology building, a state-of-the-art teaching and learning facility. Representing the College's commitment to environmental sustainability, it is the state's first LEED (Leadership in Energy and Environmental Design) certified "green-building" ever built with state dollars.

In 2018, with immense support from the local State Delegation, Governor Charlie Baker signed a bond bill guaranteeing $25 million to the College for the construction of the new Frank and Maureen Wilkens Science and Engineering Center. Shortly thereafter, Mrs. Maureen Wilkens, a visionary and generous benefactor of the College, contributed $5 million towards the project. This marked the largest single donation by any individual in the College's history, and one of the largest single gifts in the history of United States community colleges. The Frank and Maureen Wilkens Science Center is expected to be completed by 2023.

It might be tempting to say that those first students of 1961 could never have imagined Cape Cod Community College as it is today, but it would not be true. They had a vision which was stated in an unsigned article in the December 1965 issue of the school paper, The Beacon:

"Reputations will be earned, traditions will come, just so long as we don't lose sight of the dream and the idea. In time, our graduates will earn their place in the Arts, in the Sciences and Industry. In time, we will look back with great pride on the fact that many traditions enjoyed by future enrollees were started by us. In time Cape Cod Community College will be our greatest pride because we helped to build it."

That vision is the legacy of students past, students presents, and the future students and graduates of Cape Cod Community College.